This small private chapel was designed for Nicolás Ibáñez Scott by Neil McAllister. On the same latitude south as St. Comghan’s is north, Nicolás has also built a chapel in the wild volcanic landscape of the south of Chile. It is constructed to withstand the stresses of that evolving part of the globe, far removed from the relatively settled geology of Argyll. In a throwaway world, both chapels have been designed to be enduring features of their very different surroundings. The name “Kilchoan” where St. Comghan’s chapel is situated is believed to derive from “Cille Chòmhain” or “cell of St. Comghan”, an 8th century Celtic monk. St. Comghan probably never visited the site but instead a monastery was established later in his name by monks from Iona, hence the name of the new chapel.

The design has drawn inspiration from the chapels around Iona Abbey and St. Margaret's Chapel at Edinburgh Castle. This included sourcing the granite from Tormore Quarry, the same quarry as was used for the Iona chapels. The chapel is built on simple geometric proportions of a golden rectangle, square and circle. The design also makes use of the symbolic numbers of three (the Trinity) and seven (creation, perfection, Sabbath rest). It is a Romanesque style building of traditional stone construction with a barrel vault and domed apse. The simple geometry is contrasted with carved detail to pick out the entrance and chancel arch in a mix of Romanesque and Celtic patterns. The drawing work was done utilising to the maximum Neil’s considerable expertise in 3d drafting. Each cut

and dressed stone, including the complex 3d stones of the half dome of the chancel, was drawn at full scale to provide templates for the stone masons. The structural design of the building was assisted by John Charlton of Elliott and Co of Edinburgh, conservation engineers and long-time collaborators with GLM. At an early stage in the design process we selected Ardle Construction as the contractors to undertake the work, aware that the use of entirely traditional construction techniques had probably not been employed in an entirely new building for generations. Neil worked tirelessly with Ardle’s Ian Cumming throughout the design and construction process. Further detail about the design, construction and completion of the chapel can be found on the GLM Blog. 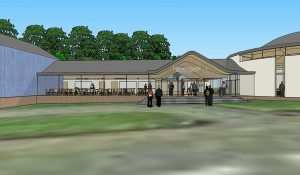 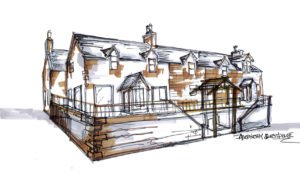 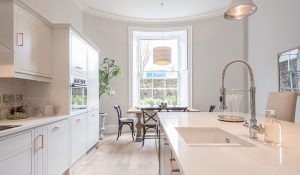