I (Neil) recently received the news from the Passive House Institute that I had passed the exam and am now a Certified Passive House Designer.

This continues in GLM’s heritage of seeking to tread lightly on the earth in all of our projects, particularly in the alteration and refurbishment of historic properties.

The fact that low energy design is now no longer a fringe interest but very much mainstream could be seen by the fact that all courses in Scotland were fully booked well into the future and the course I took, run by MosArt in Ireland, was filled with a variety of architects, engineers and, in particular, major contractors.

Passive House (or Passivhaus) was originally a German standard aimed at new build houses.  Now, almost 3 decades later, it has been used for all building typologies – single dwellings, blocks of flats, schools, offices, swimming pools, etc.  The Enerphit variant is specifically designed for the upgrading of existing buildings and, while it makes a few concessions for the realities of working with existing fabric, it still results in a very highly performing low energy building.

Passive House reduces the energy demand of a building through high levels of insulation, elimination of thermal bridges, high performance glazing, high levels of airtightness and ventilation with heat recovery.  With these features it brings very low levels of operational energy usage.

Sketch floorplans of a Passive House

It is important to recognise that Passive House is not a panacea that will resolve all our problems.  It focusses solely on bringing down the operational energy requirements of our buildings to a very low level but doesn’t particularly care where that energy came from*.  It also doesn’t address the issue of embodied energy – the energy that goes into the construction or refurbishment of a building.  This has been overlooked for years but is more and more being recognised as key as often it will be many decades before the operational energy consumed by a building passes that which went into its construction. 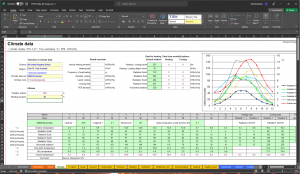 Climate data which is used in the design

Despite these caveats, Passive House is a useful tool in the box to address one important aspect of sustainable construction and when coupled with the development of other standards for the assessment of embodied carbon etc. will become key to how we build the houses of the future but, more importantly, how we upgrade the ones we already have.

At GLM, our bread and butter is the upgrading of existing buildings.  Some of these, particularly those in need of extensive refurbishment, may be perfectly suited to a full blown Enerphit certified retrofit.  For others, a lighter touch may be needed – but still many of the same principles can be applied.  For example we have long recognised the huge benefits to be gained by overhauling existing windows to reduce draughts.

If you’d like to talk about this more, please get in touch.

* At least not in the Classic version – there is also Plus and Premium certifications available which take into account on site renewables.