Amid a triumphant award season for GLM that includes wins and shortlistings in some of the UK’s most prestigious architectural awards, the RIAS Award for the Inn at John O’Groats has arrived at it’s new home at the most northern tip of the UK. The award plaque was mounted inside the main foyer of the Inn at John O’Groats by GLM architect Neil McAllister, Natural Retreats General Manager Janette Jansson and GLM’s John O’Groats Construction Manager Bruce Mackay.

GLM was awarded the RIAS Award in the Tourism & Visitor Facilities category on 6 June, 2014 at the incorporation’s annual awards dinner. GLM also received the Wood for Good/Forestry Commission Scotland Award – a special category award recognizing the best use of timber amongst the shortlisted projects. 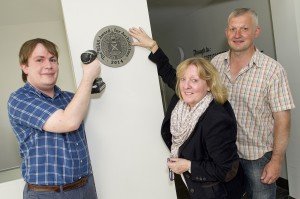 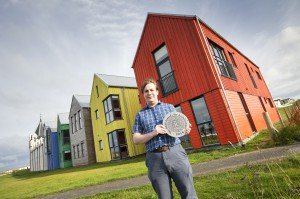 John O’Groats also welcomed this year’s judges for the Andrew Doolan Best Building in Scotland Award over the weekend. The Doolan Award is the largest architectural prize in the UK and one of the most significant architecture awards in the world. The Inn at John O’Groats is one of five shortlisted projects in this year’s running. The winner will be announced at an awards presentation in November 2014. For more information on the Andrew Doolan Award, click here.