Combat fear of failing foam to tackle the climate crisis

One of the commonest questions I am asked by clients contemplating the purchase of a building is “will it fall down?”.  The answer to this implicitly binary question is that it is the wrong question to ask.  Buildings rarely fall down.  Bits may fall off them and they may get increasingly expensive to maintain, or they may require repair or refurbishment but actually falling down …. that would be unusual, to say the least.

However the idea of catastrophic failure is hardwired into the public consciousness and into the minds of some surveyors for whom a nuanced, balanced report assessing what the future may hold for a building, is evidently beyond them.

Navigating through the obstacle course to the sale of your house can be tricky.

The iconic Barratt helicopter advert of the 1970s coincided with a loss of confidence in timber framed houses in England lasting decades which, curiously, did not spread to Scotland where, despite a generally more challenging climate, timber framed construction thrived without the dire consequences that were feared in England.

There have been other scares and alarms down the years.  Often they play into fears about Woodworm, Dry Rot, Rising Dampness and Japanese Knotweed and suspect cladding in the aftermath of Grenfell.  Firms who purport to have insurance backed solutions and specialist expertise (usually on the back of vastly exaggerated remedies), spring up in response to whatever is the latest scare story.

A new one is now with us.  Mortgage surveyors have identified foam insulation as a deadly threat to buildings.  As always, to an extent they have got a point.  The insulation of buildings is a political dogwhistle.  Statistics are bandied about to demonstrate how much carbon dioxide could be saved if our homes were properly insulated. Grant incentives have driven a cheapskate industry manned by cowboys who have merrily pumped insulation into places it should never have gone.

However, a more nuanced response is called for.  What is “not recommended” is not synonymous with a catastrophic failure.  Unfortunately nuance (AKA “risk”) isn’t an easy concept for a form filling surveyor/valuer, lacking in experience of repair and refurbishment projects at the sharp end, to come to terms with.

Responding to the Energy Crisis

One of the very limited range of options for upgrading the insulation in a traditional Scottish house, that is available to an owner, is to insulate between the lath and plaster wall linings (strapping) and the stonework with an open cell foam.  This can also be applied to the underside of roofs and floors.  The following video outlines the process being conducted in a Georgian property in Edinburgh.

This foam (Icynene) stops all airflow (one of the main sources of heat loss) as well as improving the U-Value of the structural element, whilst being vapour permeable. 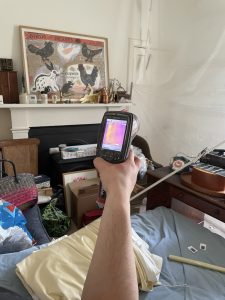 Theoretically it might be supposed that it (and any insulation on the inside on a building) is undesirable because it leaves the stone wall colder than it would otherwise have been, and because it bridges an air gap that would otherwise act as a barrier to water ingress.  However, these are theoretical issues and the system has been extensively researched and tested. The conclusion is that, used in accordance with its BBA Certification, it is effective and has none of the damaging consequences that have been suggested.  It could have, of course, if it was wrongly used.

Now we are hearing stories of surveyor/valuers effectively declaring properties “unmortgageable” unless it is removed – not because it has failed: this is yet another case of panic based on technical ignorance.

Get your act together

The current situation creates a dilemma for the individual and an obstacle to meeting the very necessary energy saving targets to address the Climate Emergency.  Let’s hope that the Council of Mortgage Lenders can rise to the challenge and sort this out quickly.