Louise Glendinning Shortlisted in Young Surveyor of the Year Award

We are delighted to announce that our very own Louise Glendinning has been shortlisted in RICS Matrics Young Surveyor of the Year Awards in the building surveying category. The awards recognise and celebrate the most inspirational young surveying professionals in the UK and are open to all young surveyors including trainees, associate members and newly qualified members.

Louise joined GLM as a Graduate Building Surveyor in 2012 after receiving her BSc with Honours in Building Surveying from Edinburgh Napier University.  She was selected as a result of a group interview process where, against other graduates, she showed a certain spark and resilience. At first, like all graduates, she took the role of assistant. Highly organised, she would support the Chartered Building Surveyors on surveys, making sure that everything was in order in advance of going out to site and then supporting the onsite inspection. She quickly became ever more useful in the actual inspection itself and now, as a Chartered Building Surveyor, runs and oversees jobs and major projects on her own – often managing a team of graduates. After successfully passing her APC in May on her first attempt, Louise has stepped up to a senior level and leadership role within GLM’s building surveying team becoming one of our most valued and reliable team members.

Ian McKee, GLM Managing Director and Chairman of RICS Scotland, had this to say about the shortlisting: “I have been mentoring Louise since she was a fresh faced graduate and am delighted to see the industry recognising her accomplishments. One of my key areas of focus as RICS Chairman is to encourage more people like Louise to enter this rewarding profession. Like me, she has chosen to take a leadership role with RICS serving as the current Vice Chair of RICS Matrics. I can rest assured that the future of the profession is safe in the hands of such committed surveyors like Louise and all the other shortlisted individuals.” 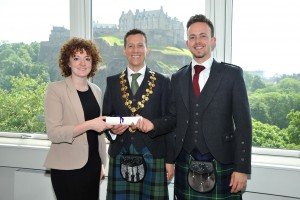 As usual, the standard of entries is high for this particular award with an impressive array of inspirational role models – an excellent testimony to the young talent in the profession. It’s no surprise to us that Louise has been shortlisted as she is certainly GLM’s young building surveyor of the year! The winners of each category will be announced on 19 November at the awards ceremony in London.