Posted by Shaun Perry on Feb 6, 2015 in Architecture, We Are GLM

GLM architect Neil McAlllister joined a panel of experts in the January edition of Architect’s Choice to weigh in on London’s controversial Garden Bridge. Architect’s Choice asks, “when is it okay for architectural design to exist merely as a spectacle and not to be used by the masses?” Neil?

When considering the proposed Garden Bridge, the first thing to recognise is that primarily it is not a bridge. If there was a need for another pedestrian crossing of the Thames at this point, a need which is disputed by many, a high quality bridge could have been commissioned at a fraction of the cost. The Millenium bridge, further along the river, cost a mere £18m and even Calatrava’s beautifully sculptural Puente del Alamillo in Seville is estimated to have ‘only’ cost around $40m compared to the eye-watering budget of £175m for this project. Instead I would suggest this is primarily a sculpture – a piece of public art – one that can be walked on but ultimately it is designed as a piece of fantasy not as a means of transportation. It is clear that the originators of the scheme had no greater practical purpose in mind as they want it to be “the slowest way to cross the river”.

Architects have always dreamt of fantastical structures. Some of these have grand theories behind them, like Paolo Soleri’s arcologies; some are monuments to great events or great men, like Boullée’s monument to Isaac Newton; others are solely creations of geometric gymnastics and whimsy; but most of them are never built and only live in the minds of their creators or in their drawings and models.

As a fantasy, this one is quite interesting – the form is elegant, the mushroom forms organic, and the idea of trees growing out of a bridge spanning over a river is an intriguing image, reminiscent of the floating “Hallelujah Mountains” in the sci-fi film “Avatar”. Apparently the inspiration came from Joanna Lumley’s memories of a childhood in Kuala Lumpur with gardens apparently floating on the mist and a desire to create a “floating paradise garden”. This is an image that I can imagine dreaming of, sketching, modelling, painting but is actually building it justified?

The question revolves not around the building of this fantasy but the building of it in a very public place, with limited public access with significant amounts of public money. Once this is built in the centre of London it will no longer be just the dream of a few people but the concrete reality of the many – radically changing the appearance of the city where they live, work or visit. Although it will constantly be visible to the public, access will be restricted. This is not unusual for monuments, or even conventional land-based parks where gates are frequently closed at night. However, some of the suggested restrictions – like limiting the size of groups using it without prior notice to eight – make it clear that this will only be a pseudo-public space.

As a fantastic monument to nothing with controlled public access, the final question is, if we want this modern day folly built in the first place, should it be funded with £60m of public money? Obviously this is a tiny part of the government budget – a mere drop in the ocean compared with Crossrail or HS2 – but if that money is available to spend on infrastructure, creation of public spaces and regeneration of inner city areas could it not be more effectively spent elsewhere? Several elegant bridges and beautiful public spaces along the embankment could be created – but would that have the same fanciful appeal? 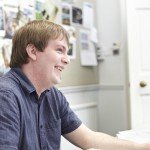 Neil joined GLM in 2008 where he took a leading role in the regeneration of the Inn at John O’Groats. In addition to conservation work, Neil has worked on various domestic and commercial projects ranging from estate cottages to high-end private houses and from cafés to hotels.