Professor Andy MacMillan has died at Inverness on his way to judge (among others) the Inn at John O’Groats for the Andrew Doolan Best Building in Scotland Award.  Sometimes portrayed as the Billy Connolly of architecture with wild flowing white hair, he was actually a patrician figure and his warmth and lively intelligence will be much missed.

Andy continued to be very involved in the world of Scottish Architecture long after his practice with Isi Metzstein had ceased and both had become eminent professors in Glasgow and Edinburgh.  I got to know him and his wife Angela when they rented a cottage from my half brother Colin in Argyll but, regrettably, I had not seen them for a few years.

A couple of decades ago we got Andy to do a design for a house for a client.  Unfortunately the economy suffered one of its periodic setbacks at that moment and the client, proved to be flaky so the house was never built.  That was a shame because it might have been the start of a working relationship with Andy that could have been fruitful.

Andy had been a partner in the famous Scottish architectural practice of Gillespie Kidd and Coia.  Much of the work of the practice was for the Scottish Catholic Church in its 1960s heyday.  It was highly sculptural architecture but a maintenance challenge, dating from an era when architects saw themselves as coming from a primarily “artist” background and when professionals in general, whether priests or architects, were subject to less challenge than now.

It will therefore be no surprise to learn that, much later, Andy played a very key part in the selection of Enric Miralles as the architect of the Scottish Parliament, a building that will be a maintenance challenge to the Scottish Government in much the same way as the spectacular but now ruined Cardross Seminary and other buildings of its era has been to the Catholic Church.

One of Andy’s last major projects was Robinson College Cambridge but he continued to design on a domestic scale long into his retirement buildings that stand out from the mass of poorly designed “house builder” products that litter the countryside.  However he will be particularly remembered as the charismatic and successful professor of the Glasgow School of Art.

Above all Andy was wonderfully good company and I had been looking forward to hearing what pithy and perceptive things he had to say about the Inn at John O’Groats. 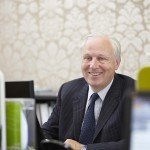 **Photo courtesy of the RIAS