Posted by GLM on Jul 29, 2015 in Architecture, Project Management

The restoration of this magnificent A-Listed castle is well underway and works commence on the next phase which will be mostly internal. Since Autumn 2014 GLM, working with specialist roofing and masonry contractors A. Thorburn Ltd, have been meticulously refurbishing the external fabric of this historically significant Scottish building and now the building is emerging reborn as the last bits of scaffolding are dismantled and GLM prepares to take on the role of Construction Managers in Phase II.

Phase I involved a significant amount of repairs carried out to the roof and stonework. Works included a complete reslating of the entire building, installation of new lead work on the flat roof, the chimneys restored and two were rebuilt, one with salvage stone and one with newly quarried stone.  Loose stonework to parapet walls and balconies has been rebuilt and extensive repairs have been carried out to decayed timberwork. The windows too have been painstakingly put back into excellent working order taking advantage of the scaffolding. Much of the leadwork and its underlying timber support structure was redesigned to accord with present day best practice.

The roof and turrets before restoration works began

The roof and turrets after restoration and repairs

Conservation best practice is at the heart of this project but it has not been helped by another form of conservation, the conservation of bats.  This has driven the need to do roofing and stone repairs right through the winter when, or so we are informed, the bats leave the building to hibernate in rock crevices!  This has been testing both in terms of weather preventing the slaters from getting on with slating work (their chalk lines get washed off) and masons having to constantly watch the temperature gauge to be able to use lime mortar.  This however is a problem well known to local lime suppliers Masons Mortar who have greatly helped with technical solutions.

The bats have been painstakingly accommodated with “bat slates” (discrete entrances for bats) and a special roosting area in the roof space, isolated from the ceiling below with new joists and moisture resistant flooring.  Future maintenance has also been a focus of attention with fixings for rope access and roof ladders. 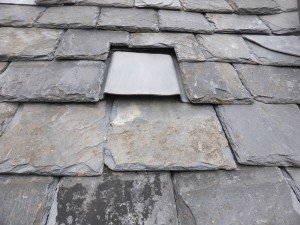 In addition to repairing and repointing the stonework with a lime-based mortar that ensures the breathability of the walls and does not impair the durability of the sandstone, GLM worked with specialists from the University of Edinburgh who advised on the selection of new stone to match the characteristics of the existing and conservationist Graciela Ainsworth to meticulously restore carved stonework. A key objective of the project was to keep as much as possible of the existing fabric. 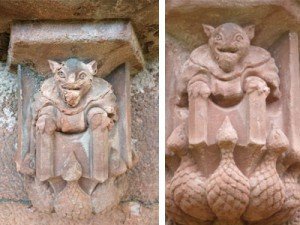 Nunraw Gargoyle before (left) and after (right) restoration

Phase II of the refurbishment has seen an “all hands on deck” approach from our team of building surveyors, architects and project managers. As our building surveying team, with support from Irons Foulner, Consulting Engineers, procures a new system of services (including a lift in one of the turrets), our architects are hard at work collaborating with our client’s team in America on internal alterations and additions. Overseeing it all is our project management team as they take on the role of Construction Managers.

Construction Management is an approach similar to the traditional way that buildings were procured in the old days.  Brown and Wardrop would no doubt have installed what was known as a “Master of Works” on site to direct the works and the various trade teams would have been individually contracted.  This was known as “Several Works” or “Separate Trades” contracting.

In Phase I GLM acted as conventional architects and contract administrators with A Thorburn Ltd acting as main contractor. Phase II will see GLM effectively performing the role of main contractor with our own man full time on site and taking responsibility for procuring, coordinating and managing the individual trades’ packages as professional construction managers with none of the counterproductive incentives of a main contractor. It is a departure from our traditional role as professional designers, but not unfamiliar.  We very successfully adopted this approach to the regeneration of John O’Groats.

Phase II will include sensitive internal alterations including some remodelling of rooms formerly used as guestrooms by the monks to create top end accommodation and the installation of a lift into a turret the full height of the building. The client also plans on constructing an orangery to form a link and to convert the service courtyard buildings to house a new spa, gym and garage.

In addition to the Tower itself, Phase II will involve a complete restoration to the 17th century Beehive Doocot and the 19th century iron framed glasshouse that is presently in very poor condition. The glasshouse was relocated to Nunraw from a convent in the Borders some years ago and the client intends to fully restore it to its original state. 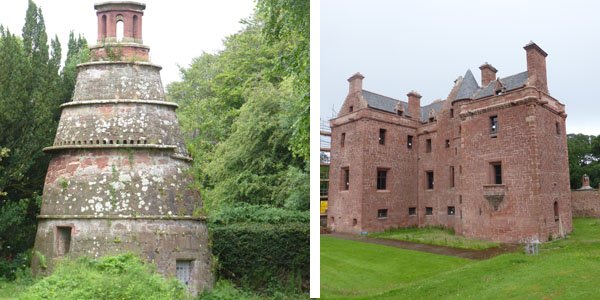 The full refurbishment is expected to complete around Christmas 2016.