GLM was proud to sponsor the Midlothian Swimming Club who held their recent competitive Spring Meet at Prestonpans Leisure Centre. Diane Roe, our Finance Manager, holds the club treasurer position with both her children, Amber and Logan, swimming regularly for the club. GLM respects the determination, drive and persistence of the swimmers, who train between 3 to 8 sessions a week in order to obtain impressive results for a small group. Midlothian Swimming Club currently has around 80 swimmers ranging in age from 7-17. Swimmers are divided into four squads, Gold, Silver, Bronze and Development depending on age and ability.

The Spring Meet Trophy was taken by the Warrender Baths Swim Club with Midlothian finishing in second place in points for the medals. 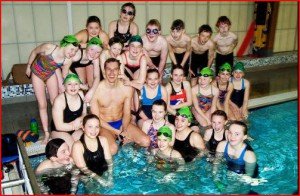 GLM encourages exercise within our own team and our healthy bunch participate in a variety of activities to get their hearts racing including marathon running, open water swimming, snowboarding, mountain biking, yoga, zumba, body balance and old fashioned sessions at the gym. Several of the staff regularly cycle to work and GLM encourages those who participate resulting in a happy and healthy workplace.

In February 2014 Midlothian’s team of 34 swimmers recently emerged victorious after being pushed hard by the Inverness team to bring home the trophy from the Forres meet.

Midlothian swimmer Fiona Ingles finished first in both the 50m butterfly and 50m freestyle events in the East District Masters Championships taking the titles in the 16 -24 years age group.

After training throughout the summer of 2013, Lauren Sutherland, Beth McFarlane and Fiona Inglis travelled to Sheffield to compete in the British age group and youth championships where they came up against the fastest swimmers not only from Britain, but also throughout the world with the event attracting swimmers from the Middle East to Mexico. It is a huge achievement to have 3 swimmers from a small club like MSC qualifying in the same year. All 3 swam well, either producing personal bests or swimming on their best with Lauren narrowly missing the final of the 200m breaststroke.

East District Age Group Championships were held at the Royal Commonwealth pool in January 2014. Lauren Sutherland continued to dominate her age group winning Gold in the 100m breaststroke and 200m IM. To add to this she also won bronze in the 100m butterfly and 100m freestyle. These results added to the medals gained in the first 3 rounds meant that Lauren was awarded the top swimmer trophy in her age group.

If you are looking for swimming times to beat, we suggest you start with the 11 year old Personal Best times from the recent Spring Meet (Midlothian swimmers*):

GLM is also sponsoring the Midlothian Minnows Meet on the 18th May, where younger swimmers, aged 7 to 12 will be competing. If you want to witness their spectacular efforts, Midlothian Swimming Club invite you to join them at Prestonpans pool for the event.

These are potentially the stars of the future Commonwealth and Olympic Games! If you are interested in helping Midlothian Swimming Club with sponsorship of future events or have children interested in joining the club please contact Diane Roe.